The mission of the Journal is to maintain a high scientific level of discussions about the digital economy, methods of its study and development, involving in this process the most qualified experts - researchers and practitioners; to bring scientific knowledge about its most complex aspects to those who actually make decisions and those who implement them. At the same time, the journal should provide an opportunity for the exchange of opinions among professional researchers. To combine these tasks, the journal should be published in both scientific and popular science versions.

The journal's title "Digital Economy" emphasizes the interdisciplinary nature of the journal as well as its focus on new research methods and new forms of presentation which have appeared along with the digital economy. In its modern understanding, the digital economy is not only a new sector of the economy, but also new methods of collecting information based on digital technology (big data), psychometrics and computer modeling. The main versions of both scientific and popular science journals should be electronic, which will ensure prompt release and delivery to all required addresses. Paper versions of the journals are issued only for special events or by order. The estimated frequency of publication of the scientific journal is four times a year. A popular-science magazine in digital format will be small in size, but weekly (at least). Otherwise, it will be difficult to keep the attention of the target audience. In addition, it is supposed to organize a forum - a platform for discussions about the digital economy. As an option, it is considered a possibility that it will be a merger of existing platforms. The main language of the journal is Russian, but it is not excluded to print articles in Russian and English, as well as original articles in English or other languages with subsequent translation, usually by volunteers and/or using crowdsourcing.

The main subject matter of the journal will be scientific (for the scientific version) and popular science articles in the subject area of digital economy, information economy or knowledge economy. Different names of subject areas in this case reflect rather fashion, taste preferences of the authors or their belonging to a particular group of researchers (scientific school).

Articles about the digital economy and related topics that can be understood by people who have not studied the subject area and the research methods used at a professional level. The main topic is the creation and development of a single economic space for Russia and APR countries. It can also include articles on discussed issues of resource optimization and regulation, on standards in the digital economy - smart city, smart house, smart transport, Internet of things, digital platforms, BIM-technologies, smart markets, smart contracts, crowdsourcing and crowdfunding.

Federal executive authorities, the State Duma of the Russian Federation, the Federation Council, state corporations, expert communities, academic institutions, business structures, all those who are interested in digital economy and new research methods in economics and other social sciences.

Information about the editor-in-chief

Anatoly Kozyrev graduated from Novosibirsk State University, Candidate of Physics and Mathematics (1984), Doctor of Economics (2002).
Anatoly Kozyrev is a specialist in the field of knowledge economy and related areas of economics and law. The central place in his scientific interests is occupied by the problems of remuneration for creative work, return of investments in science-intensive projects, sales of information and know-how.
He has contributed greatly to the theory and practice of intellectual property and intellectual capital valuation, including the first monograph in Russian on intellectual property valuation (1997), and together with Academician Valery Makarov the first Russian textbook on the valuation of intangible assets and intellectual property (2003). Actively participates in development of problems arising in the Russian defense industry, including problems of pricing for military products, distribution of rights to the results of intellectual activity in the financing of scientific research from several sources, as well as problems of automation of circulation of intellectual rights in corporate and social networks.

Alexander Ageyev – Doctor of Economics, Director General of the Institute for Economic Strategies, Head of the Department of the National Research Nuclear University "MEPhI", Professor, Academician of the Russian Academy of Natural Sciences

Felix Ereshko - Doctor of Science (Engineering), Professor, Head of the Department of Information and Computer Systems, All-Russian Research Center of the Russian Academy of Sciences

Vladimir Kitov - Candidate of Technical Sciences, Deputy Head of the Chair of Informatics of Plekhanov Russian University of Economics

Terelyansky Pavel - Doctor of Science (Economics), Candidate of Technical Sciences, Chief Researcher at the Research Institute for Management of Digital Transformation of the Economy, State University of Management, Leading Expert of Laboratory 67

Yury Khokhlov - Candidate of Physics and Mathematics Sciences, Associate Professor, Chairman of the Board of Directors of the Institute of the Information Society Development, Academician of the Russian Engineering Academy 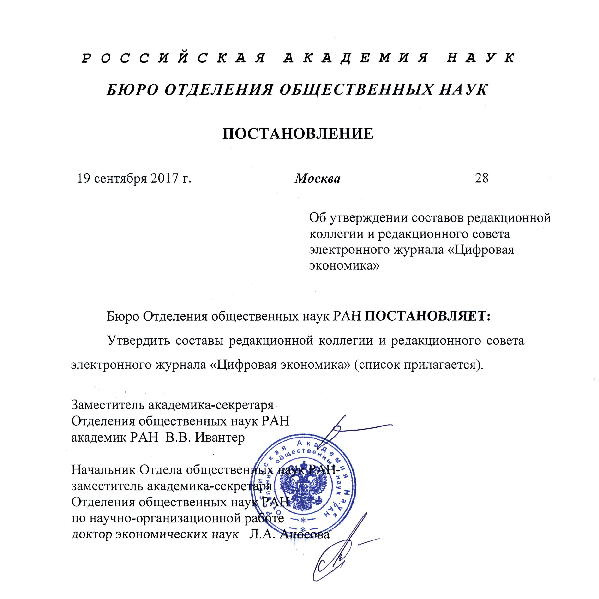 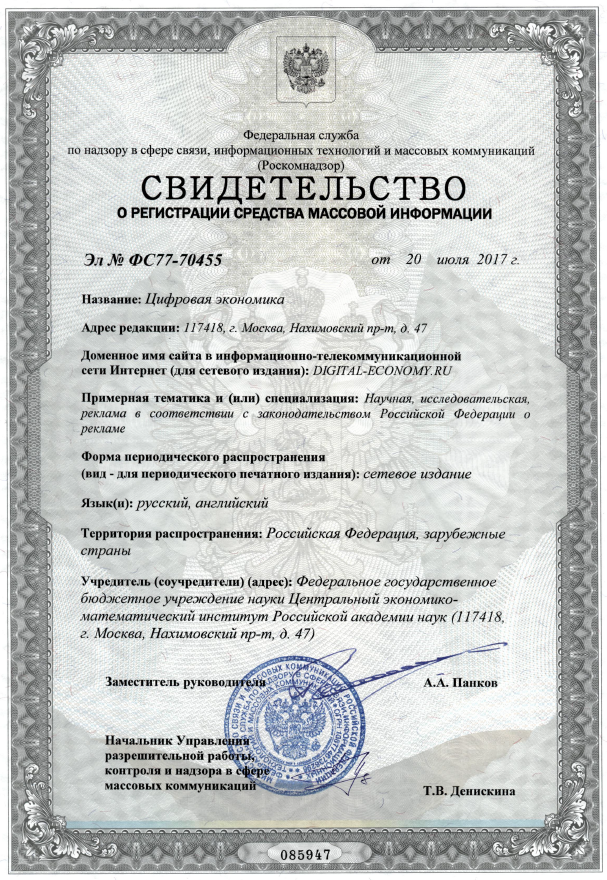 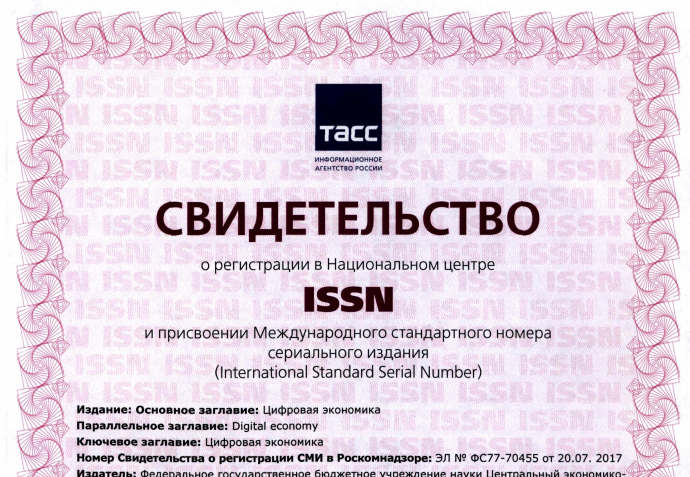 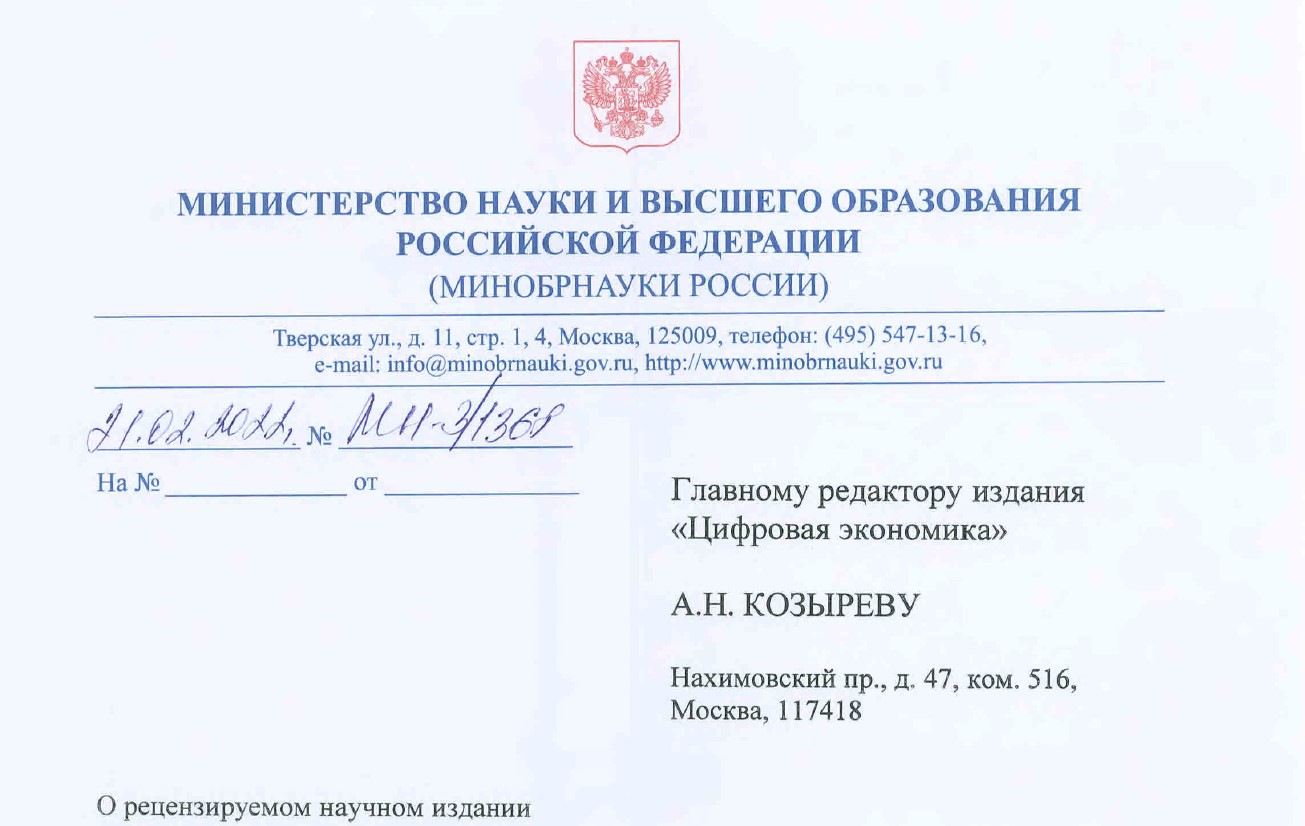